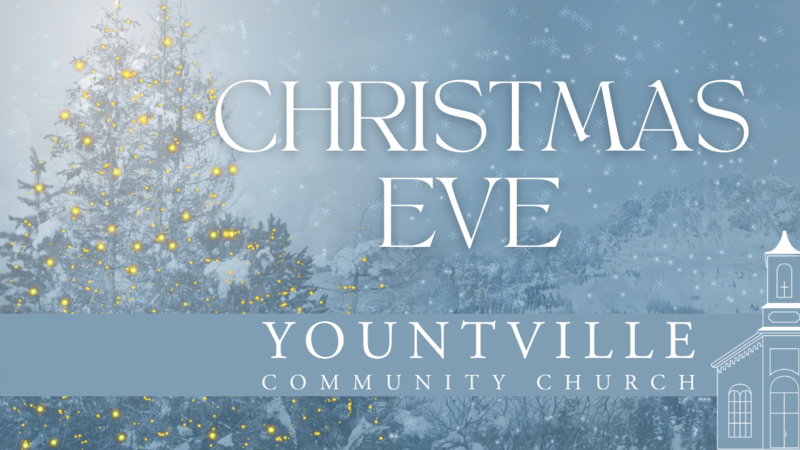 Join us for our special Christmas Eve message.

I don’t know about you, but does it seem like Christmas comes around sooner every single year?

One minute it’s August, and it feels like summer is never going to end. Then it’s Halloween, and then Thanksgiving, and then December arrives like a freight train going full steam ahead. The stores are full of people buying up turkeys, buying up hams, buying up gifts for the kids. I know because I was in Target yesterday looking for gifts.

And that’s if you come into the holiday season at full strength. Many of us enter the holidays already tired from the different challenges that we’ve faced throughout the year.

All of us have lived through almost 2 years of pandemic. And just when it felt like we might be out of the woods, we’re facing yet another COVID variant this Christmas, with all the uncertainty that it brings.

A survey out of Monmouth University found that 60% of us are worn out by the way that COVID has impacted our daily lives.2 This has been a challenging season.

And many of us have faced personal challenges on top of everything else that is going on in the world. The loss of loved ones, declining health, financial instability, family breakdown. Those burdens don’t just disappear for the month of December. We bring those burdens with us into

the holiday season. And so for many, Christmas might not look merry. The holidays might not be happy.

Christmas can be a mixed time for us.

But it won’t always be like that. And the Christmas story is the key to seeing beyond our present troubles.

So why don’t we pray, then we’ll open the Bible together to find out what it says?

Our heavenly Father, you know what is in each of our hearts. You know what we have been through this year. You know what we need. So we pray that you would speak to each of us now as we think about the Christmas story, and the difference Jesus makes. In his mighty name we pray, Amen.

All through December at Yountville Community Church, we have been thinking about Christmas through the lens of Christmas carols. For many of us, Christmas carols have been part of our Christmas tradition, and we’ve sung these words since our childhood, we know them. But when we look closely, the carols also capture profound truths about Jesus and the Christian faith.

So that’s what I want to do for the next 10 minutes or so. Look closely at my favorite Christmas carol to see what deep truth it reveals.

Now in case you didn’t guess, my favorite carol ever is the carol we just sung. O Holy Night. It’s printed there on p4 of your handout so you can follow along. I’m going to tell you why I love it in just a moment, but a tiny bit of trivia before we do that.

O Holy Night was originally written in French, as a poem in 1843, and the tune we have now was written for it just a few months later by composer Adolphe Adam. The English version was written in 1855, and it became popular in the US, especially in the North, because of its abolitionist message:

But that’s not what makes it my favorite hymn ever. Apart from the musicality and the spine- tingling chorus, there is something about the end of the first verse that just gets me every time.

As I said before, our world knows what it’s like to be weary. We live in a world where everything is not perfect, where stresses and strains take a heavy toll on us.

But this song reminds us that even in the midst of the weariness, there is a beacon of hope. A light that shines in the darkness. A new and glorious morn is breaking, where the sun will rise over all our troubles and they’ll melt away like bad dreams.

The Light Shines in the Darkness

The light in the darkness is one of the great promises of the Bible.
Right from the opening verses of the Bible, we see God bring light into the world. God speaks

over the darkness, and he says: let there be light, and there was. (Genesis 1:3)3
And from that moment of creation, light becomes a powerful symbol for who God is: his

holiness, his purity and his goodness. 1 John 1:5 says:

God is light; in him there is no darkness at all.
The Psalmist speaks about God as his light and salvation (Psalm 27:1).
Then the prophet Isaiah uses the same metaphor to predict God’s salvation of his people:

The people walking in darkness have seen a great light;

on those living in the land of deep darkness a light has dawned. (Isaiah 9:2)

There is something powerful about the idea of the light dawning at the end of a long night...

We watched a new film on Amazon Prime last week, it’s called Brotherhood. It’s a true story about a group of teenage boys who go to summer camp back in 1926. The story is interesting because it delves into the way that a whole generation dealt with the losses of WWI, and teenage boys growing up without fathers. But that character development is played out against a tragic accident.

9 boys, along with 2 teachers, are caught in a storm paddling their canoe across one of the Great Lakes, the canoe capsizes and it is night time. They’re unable to turn the canoe back over, and so all through the night, they have to hold onto the boat and wait, because they can’t see the land.

3 There’s no suggestion at creation that the darkness represented evil. Other ancient religions asserted a dualism of good and evil, light and darkness representing deities that were in constant struggle paralleling the endless cycle of night and day.

Life is like that sometimes, isn’t it? We can’t see our way through the darkness. We can’t see the other side. We don’t know how long the darkness will last, and we’re not sure if we can hold on.

The tragedy in the film was that some of the characters didn’t make it through the night. They lost hope, and they let go of the boat.

But for those who held on, for those who waited, with the first light of dawn they saw that they were only a few hundred yards from shore. With the light, they were able to see what they couldn’t see in the darkness. And they were saved.

And the reason that Jesus shines light and life into the world is because he was right there with the one who spoke light and life on the day of creation. Do you see it there in v1?

You see, Jesus is not just a part of a Christmas tradition. Jesus is God born in human flesh, God’s Son from the beginning, born to deal with the darkness, born to banish everything that is broken about this world.

And we saw Jesus begin to do that when he walked on the earth. Just like God, he spoke and creation listened. In the storm on Lake Galilee, Jesus spoke and the wind and the waves disappeared. To the man born with the shriveled hand, Jesus spoke, and his hand was restored in front of a crowd of amazed onlookers. And when his friend Lazarus lay dead in a tomb, Jesus spoke once more: Lazarus, come out of the tomb... And the dead man walked out of the tomb.

You see, Jesus has the power to change the darkness. He only needs to speak, and light shines in where there was only darkness. The Word of God brings light, and life, to all who call on him.

And that’s the final image of light that I want to leave you with. Right at the end of the Bible, there’s a picture of heaven described as a city. The streets are paved with gold. Everything is shining and bright and clean and, well, perfect. And the light that shines on that city doesn’t come from the sun. It doesn’t come from the moon or chandeliers or any other source. The light that shines on the eternal city of God comes from God himself.

The city does not need the sun or the moon to shine on it, for the glory of God gives it light, and the Lamb is its lamp. (Revelation 21:23)

Pastor Tim Keller says: “Jesus is a light for us when all the other lights go out.”

Jesus, the light of the world, will never let us down. Not today, and not into eternity.

I said before that this carol is my favorite of all time. And it comes back to those lines I shared earlier:

Whoever you are, the Christmas story shines a light into your life that is unavoidable. It’s irresistible. Jesus is speaking to you today, just like he spoke to the storm, and to the man with the shriveled hand, and to Lazarus in the tomb. Jesus is offering to bring light into your life, in a way that only the Creator of the universe can do.

That’s the thrilling message of Christmas. Will you pray with me?

What Child Is This?

We hope to see you at church!

Thanks for checking us out. We'd love to see you any Sunday in person or at Church Online. Connect with us for any other questions.

Thank You 5star
I totally enjoyed your message and how simply you... Read More